Fantastic Beasts and Where to Find Them Review

Fans of J.K. Rowling’s wizarding world thought we had seen the end of it on the big screen with Harry Potter and the Deathly Hallows Part 2, so the announcement of Fantastic Beasts and Where to Find Them was welcomed by all. And more importantly, it did not disappoint. Beware: some spoilers ahead.

Based on the Comic Relief book Rowling did way back in 2001 that was a textbook Harry used and written all over (I recall the underlining of Newt Scamander’s name and an annotation by Harry or Ron that it was a cool name) it didn’t seem that a whole film – and what is now to be five films altogether – could be forged from the book. Yet this is J.K. Rowling we are talking about and like Harry Potter, Newt was a character fully formed already in her mind.

Fantastic Beasts follows Newt (Eddie Redmayne) arriving in New York in 1926. He has some mystery in his past, a suitcase full of magical creatures and causes a whole lot of mayhem as soon as he steps off the boat. Being the first in the new series, Fantastic Beasts has a lot of world-building and exposition to do and does at times do more of this than build on the story. We are all familiar with Harry’s world at Hogwarts, but this is something completely new. America in the 1920s is very far from Hogwarts in the 1990s. But it is just as amazing.

Firstly, the special effects that have created New York and the magical beasts are stunning. Seeing Frank the thunderbird rise above the New York skyline is truly magical and the production designers Stuart Craig (who worked on all the Potter films) and James Hambidge, cinematographer Philippe Rousselot and director David Yates (who worked on the last four Potter films) have done a great job of bringing the wizarding world to life for a new place and time.

Besides the brief mention of Dumbledore and of course Grindelwald (I’ll get to him) Fantastic Beasts introduces a whole new set of characters. Eddie Redmayne has joined the wizarding world and he is a perfect fit for Newt. The endearing enthusiasm he has for his creatures and his stuttering charm sets him apart from the American witches and wizards, but it also feels like he belongs with them, particularly the three friends he makes. 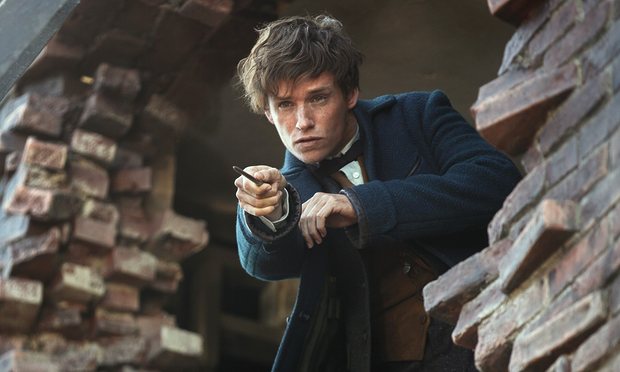 Katherine Waterston as Porpentina Goldstein the Macusa Auror is immediately likeable and I am looking forward to her future story arcs. Her sister Queenie (Alison Sudol) may be a little too flirty, but her ingenuity and legilimency come in handy in a tight spot. Possibly my favourite is Jacob Kowalski (Dan Fogler). As we have only ever seen the magic-fearing Muggles that are the Dursleys it is fun to see a muggle or ‘no-maj’ who loves this magical world as much as us the viewer.

The villainous Graves (Colin Farrell) is fantastic. A very powerful wizard who can do wandless magic, his curiosity with some of the creatures Newt carries quickly makes us wary of him, as is his strange relationship with the troubled Credence (Ezra Miller). I would like to see more of Colin Farrell as Graves in future Fantastic Beasts films, especially if we learn about how Grindelwald was impersonating him.

Speaking of, I am rather apprehensive about how Johnny Depp will portray this character, the darkest wizard to live before Lord Voldemort turns up. Hopefully, the filmmakers and Depp will create a brilliant villain for the future films. But I know for sure I am looking forward to the final battle between Grindelwald and Dumbledore.

An entertaining, funny and often heart-warming film from start to finish, Fantastic Beasts has brought to life an exciting part of J.K. Rowling’s wizarding world. Can’t wait for the next one!

I am a graduate of the University of South Wales, where I studied Film Studies. I write reviews and articles for my own blog and other sites, and spend a lot of my time living and breathing all things film related. I love films and TV. I avoid horror as I am a little too jumpy, but do have an unashamed love for soppy chick-flicks.
View all posts by Monica Jowett →
This entry was posted in Film, Review and tagged Eddie Redmayne, Fantastic Beasts and Where to Find Them, Fantasy, Harry Potter, JK Rowling, Magic. Bookmark the permalink.